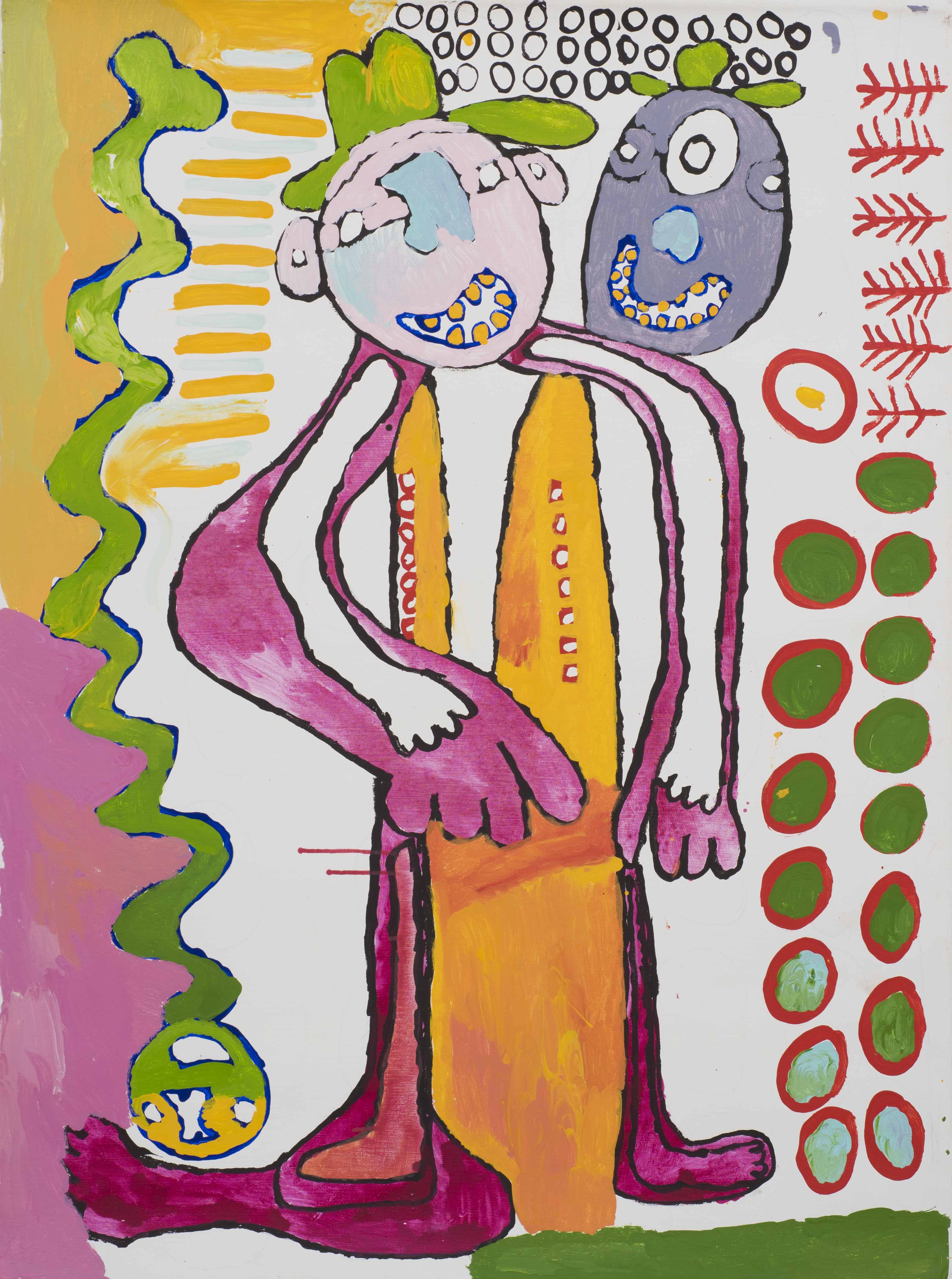 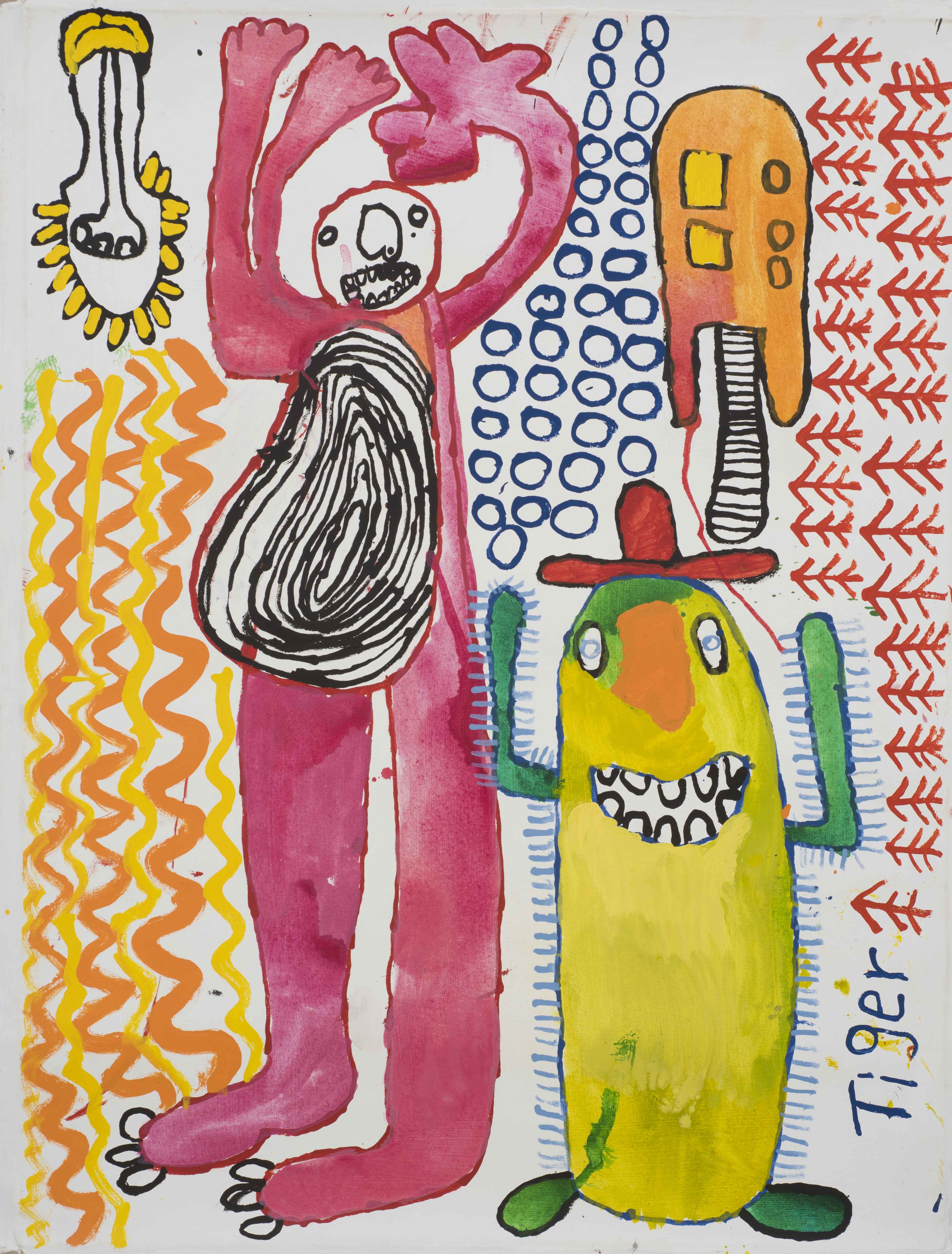 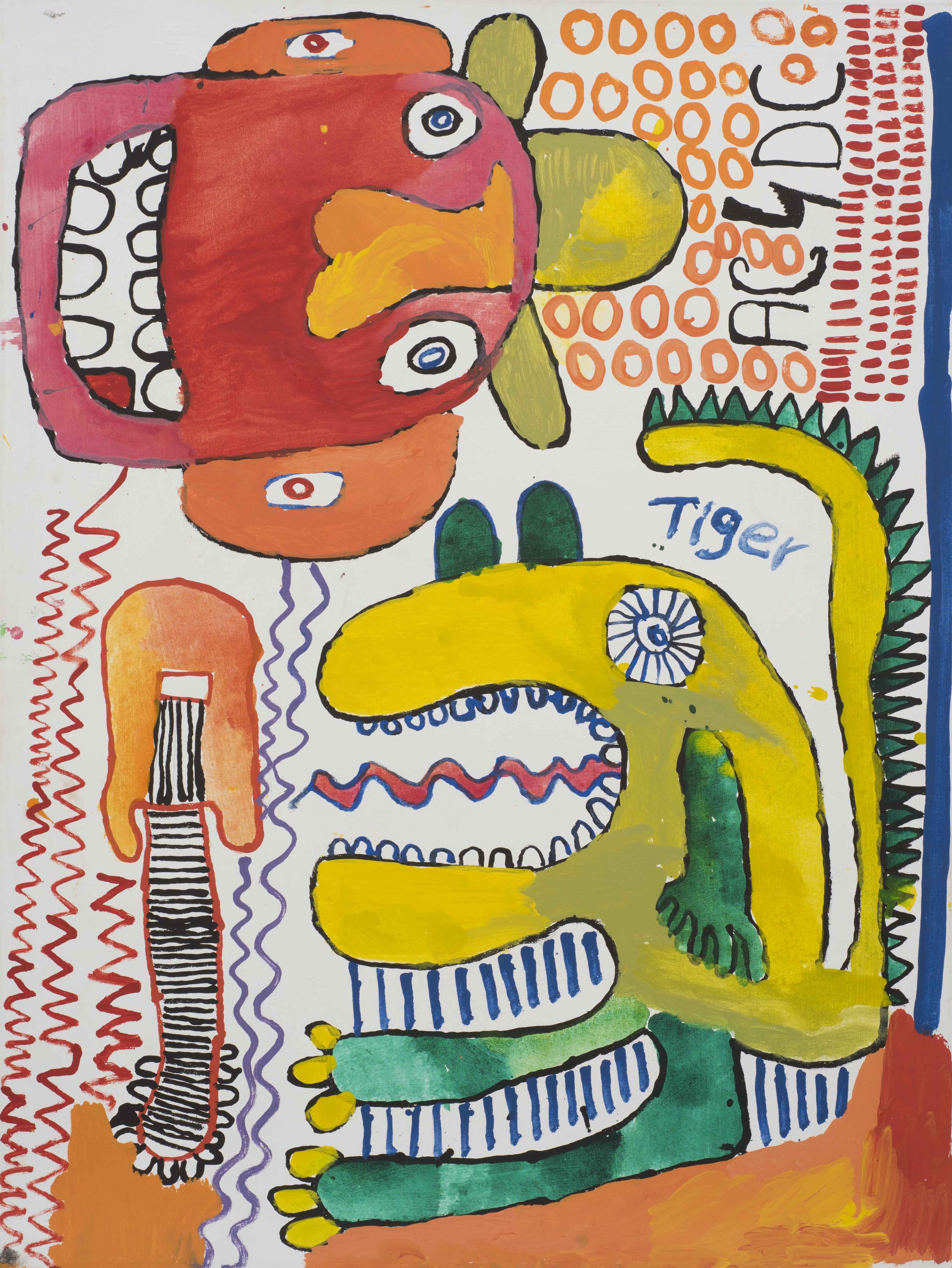 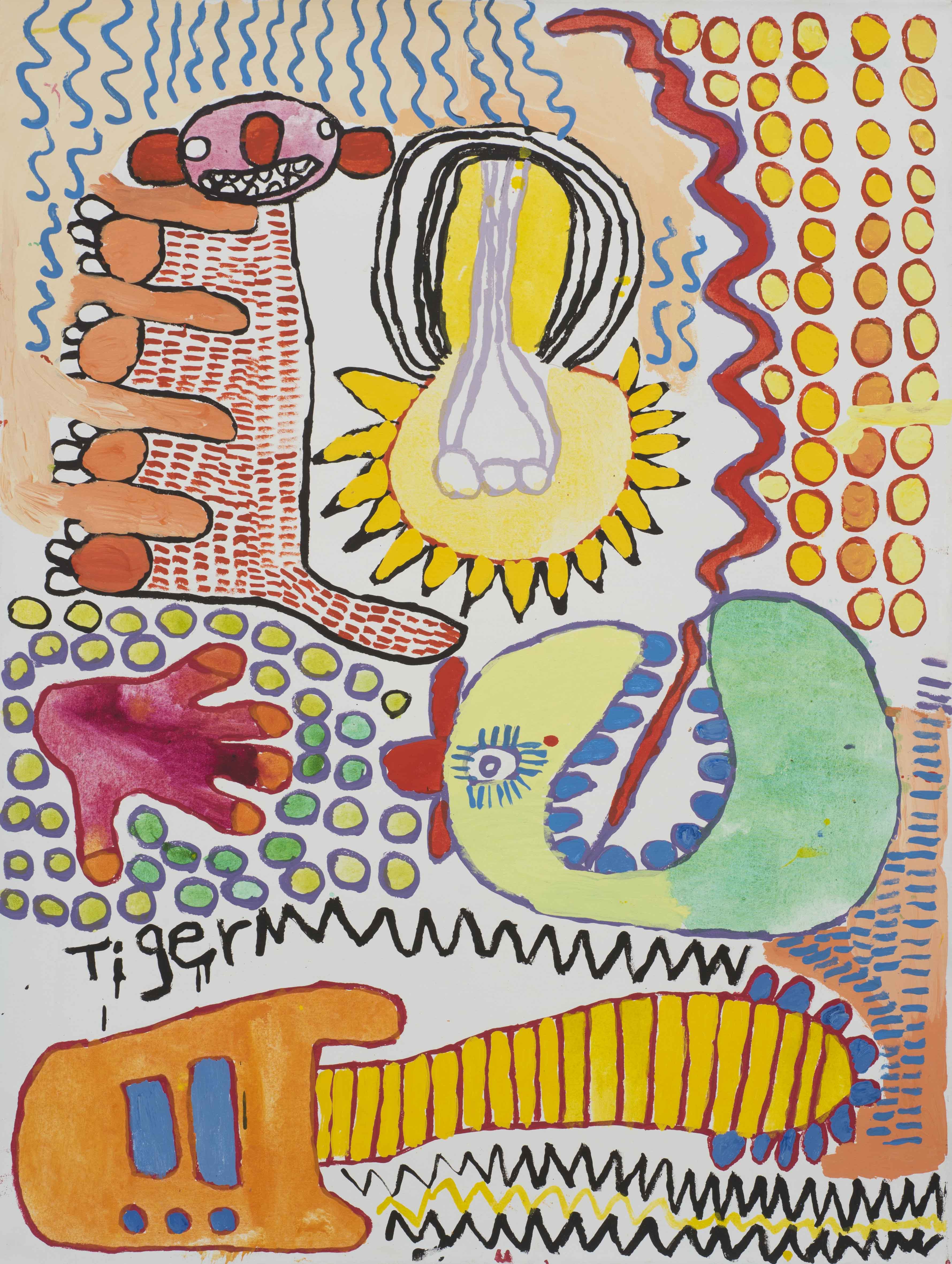 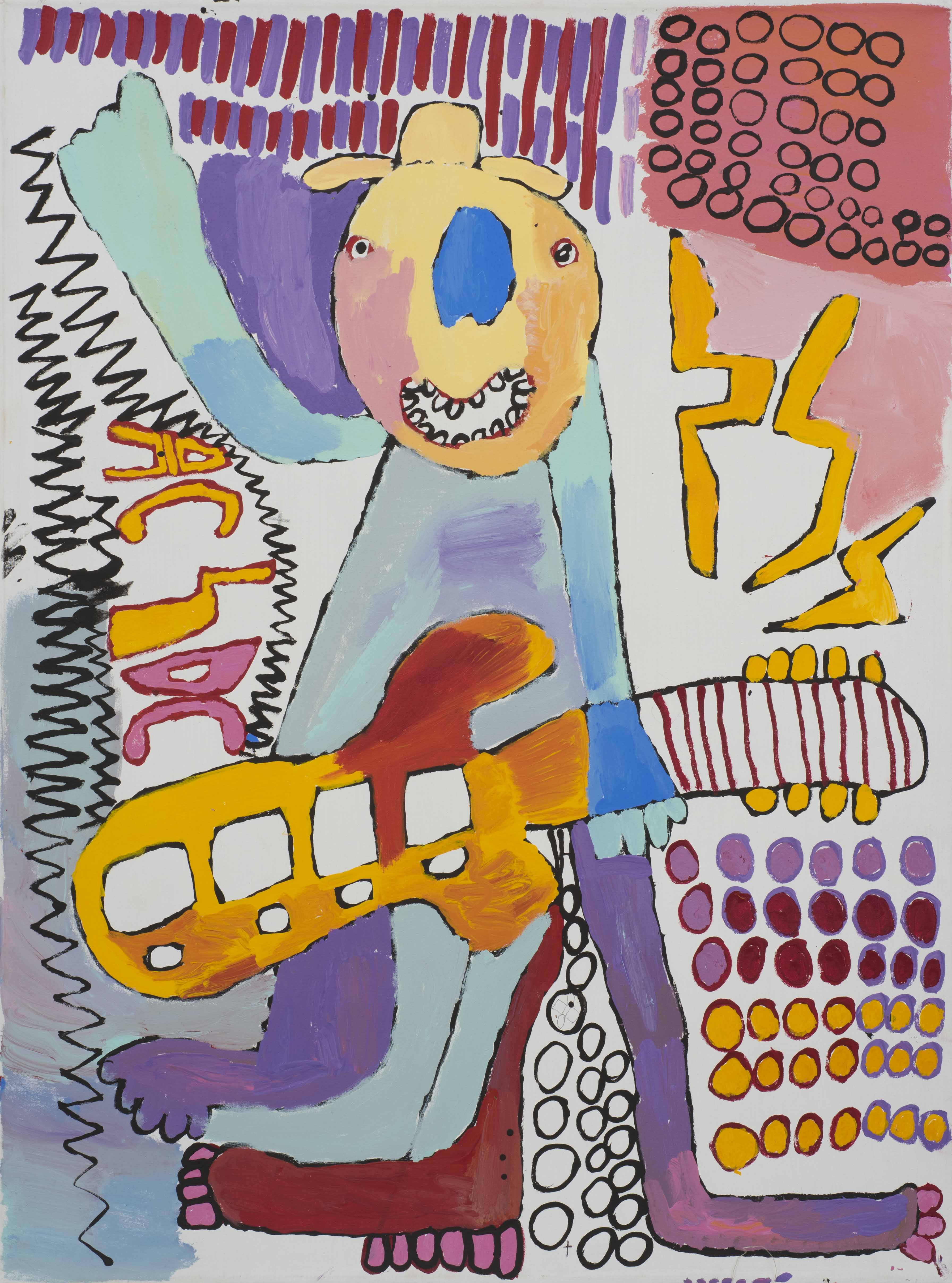 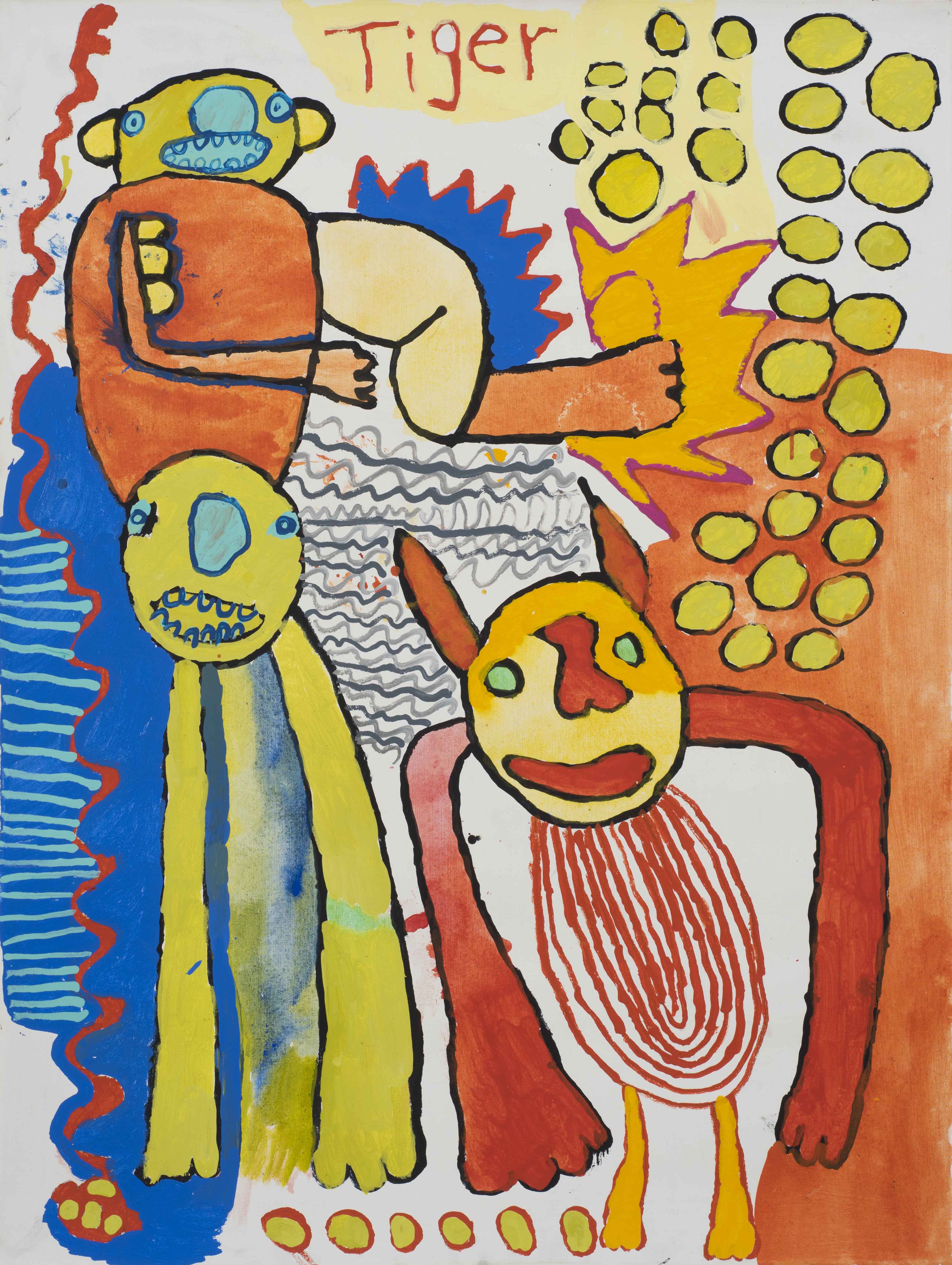 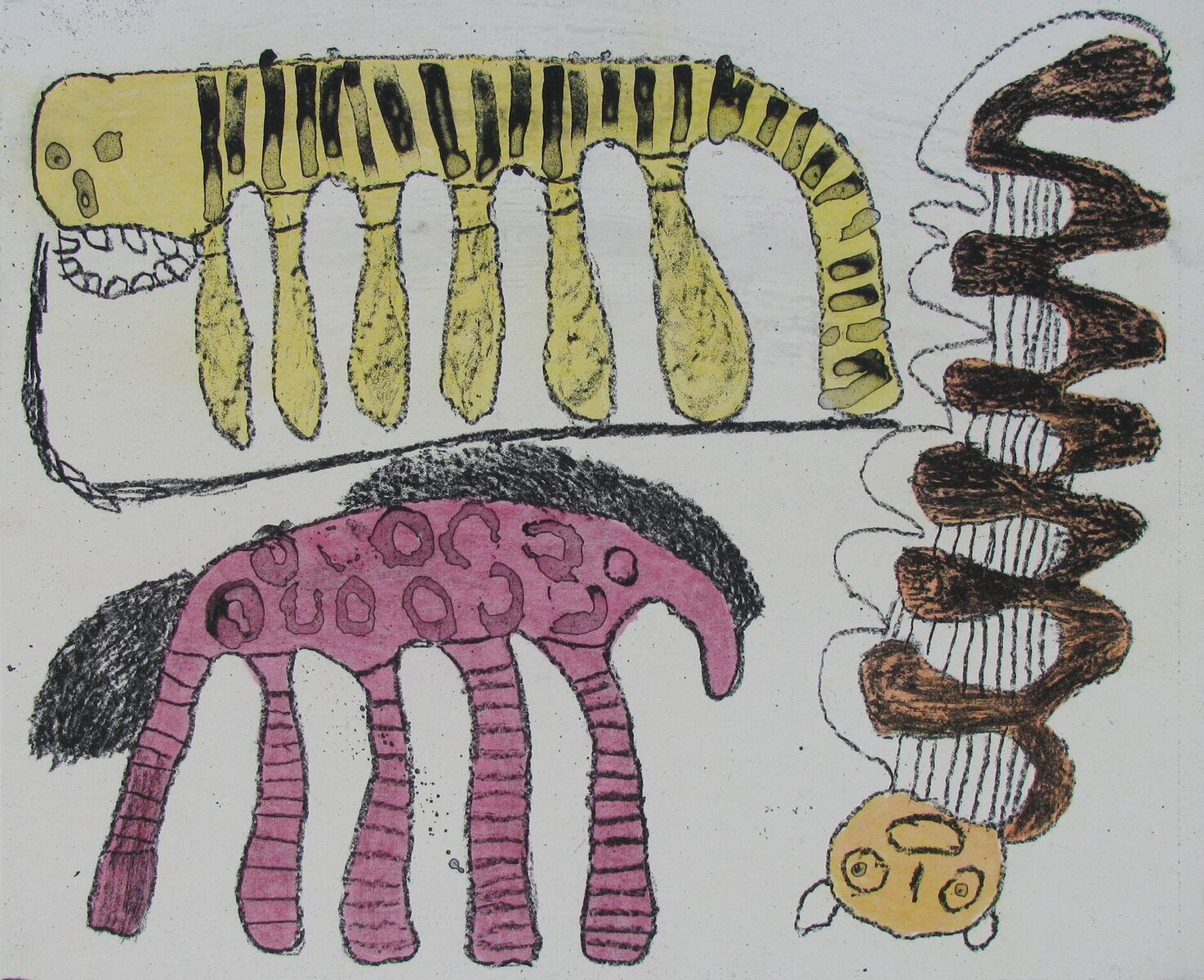 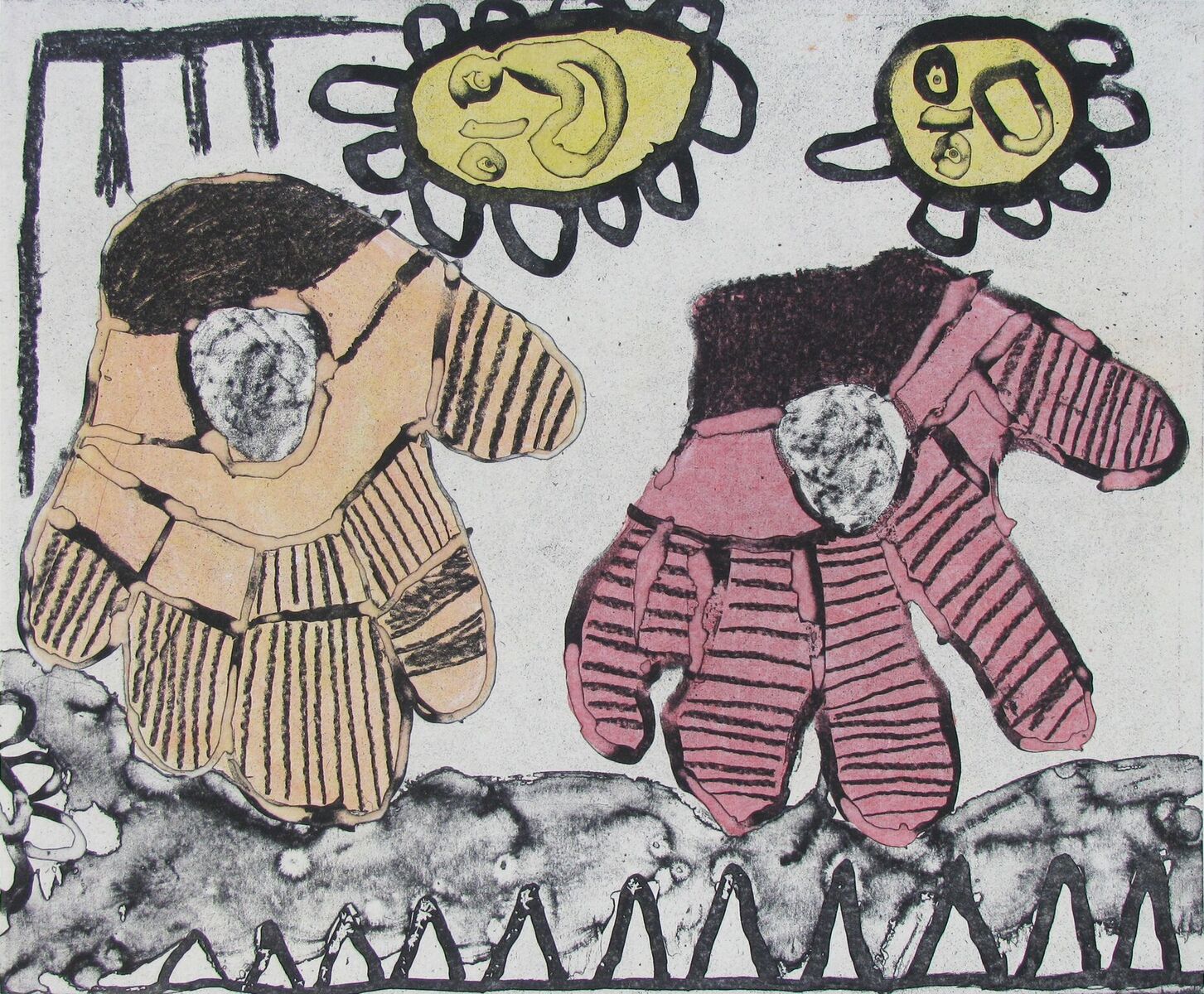 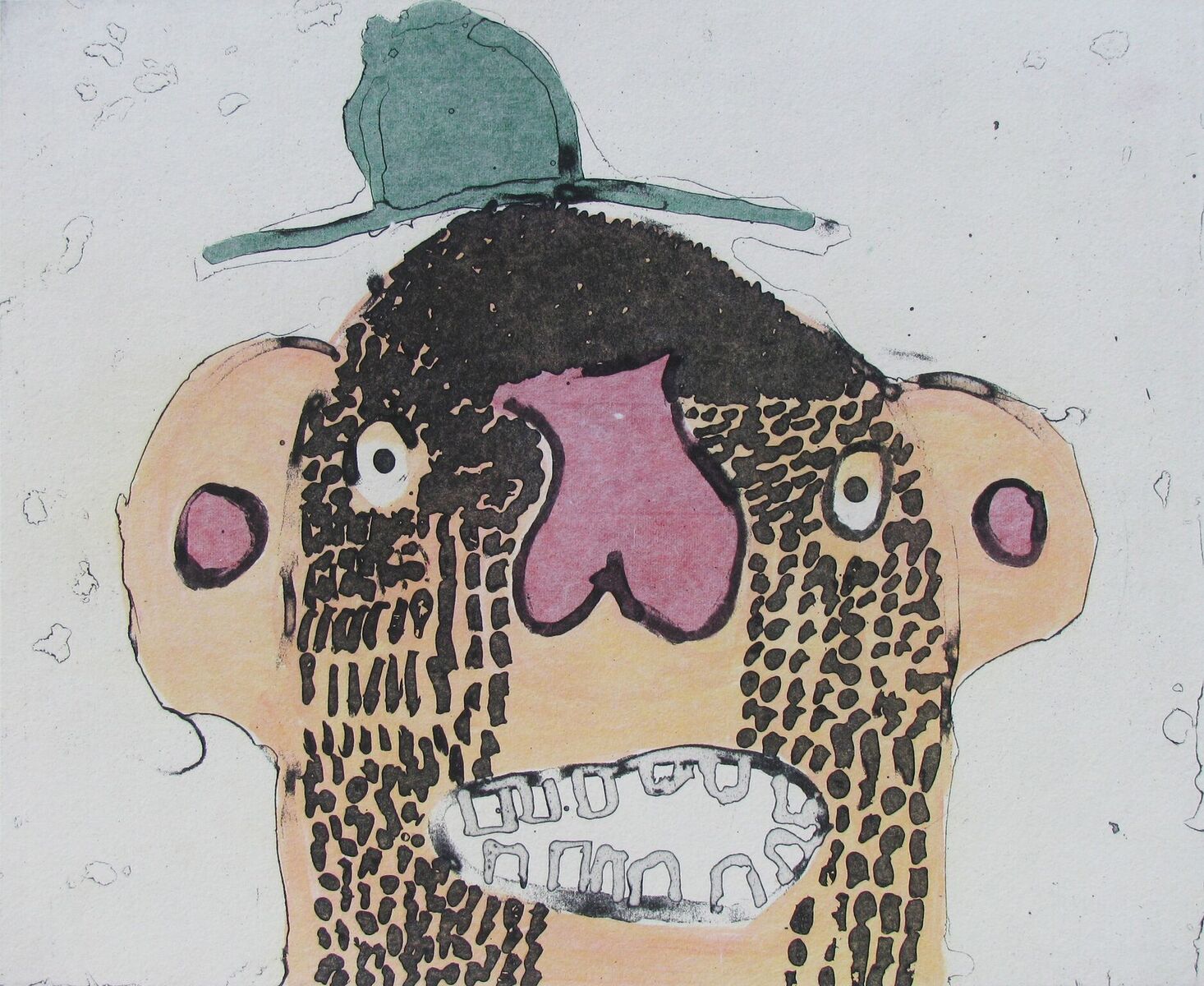 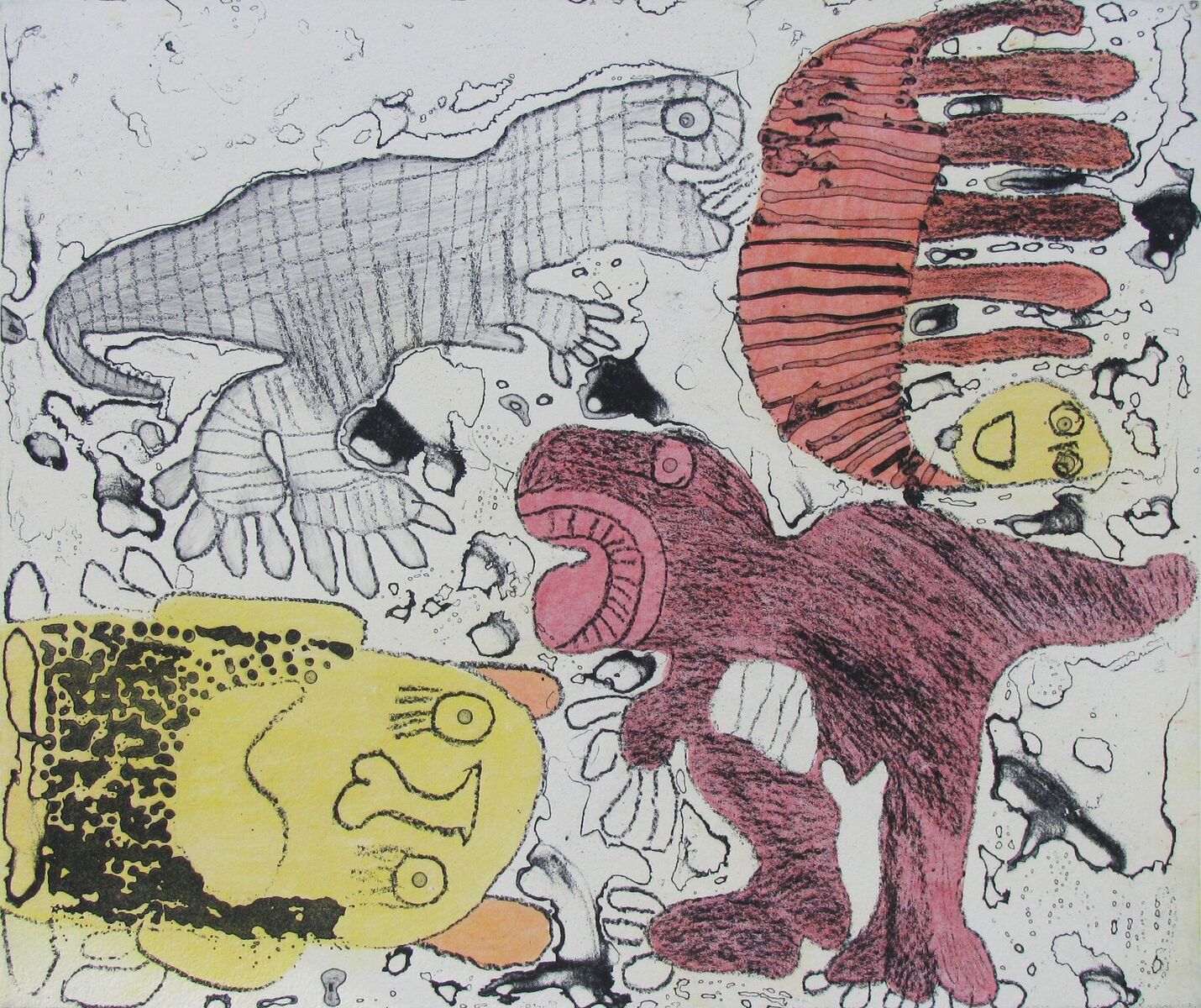 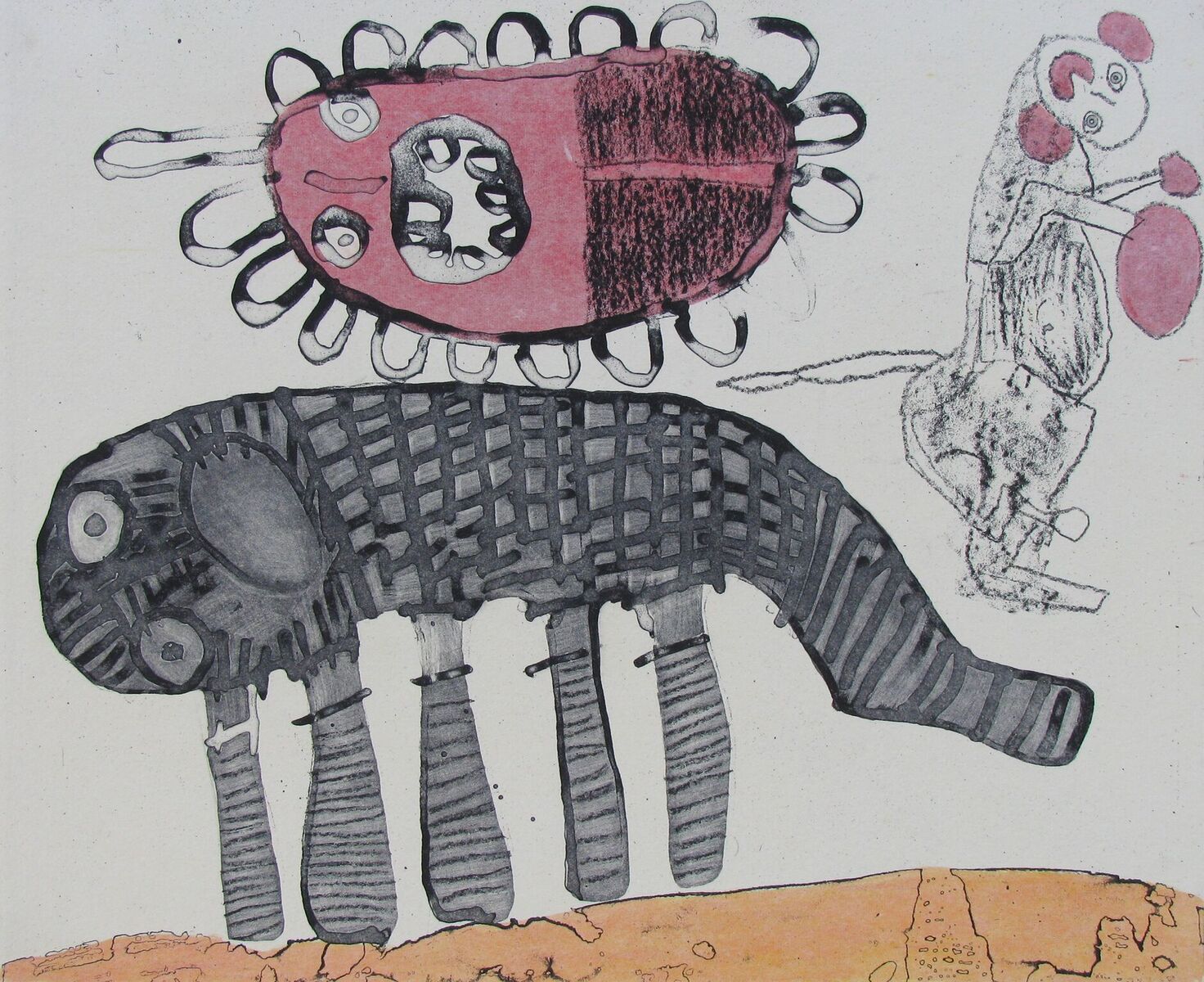 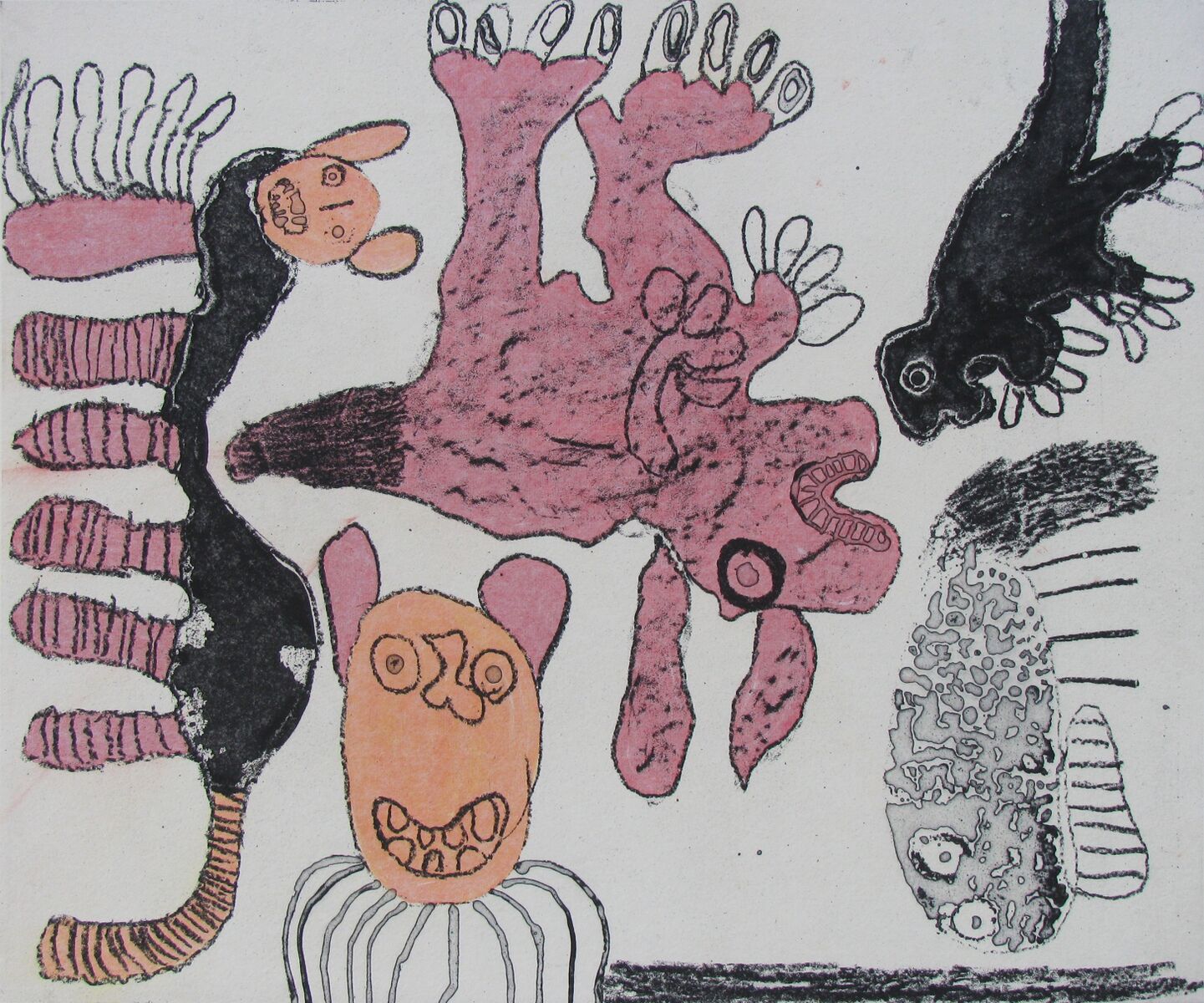 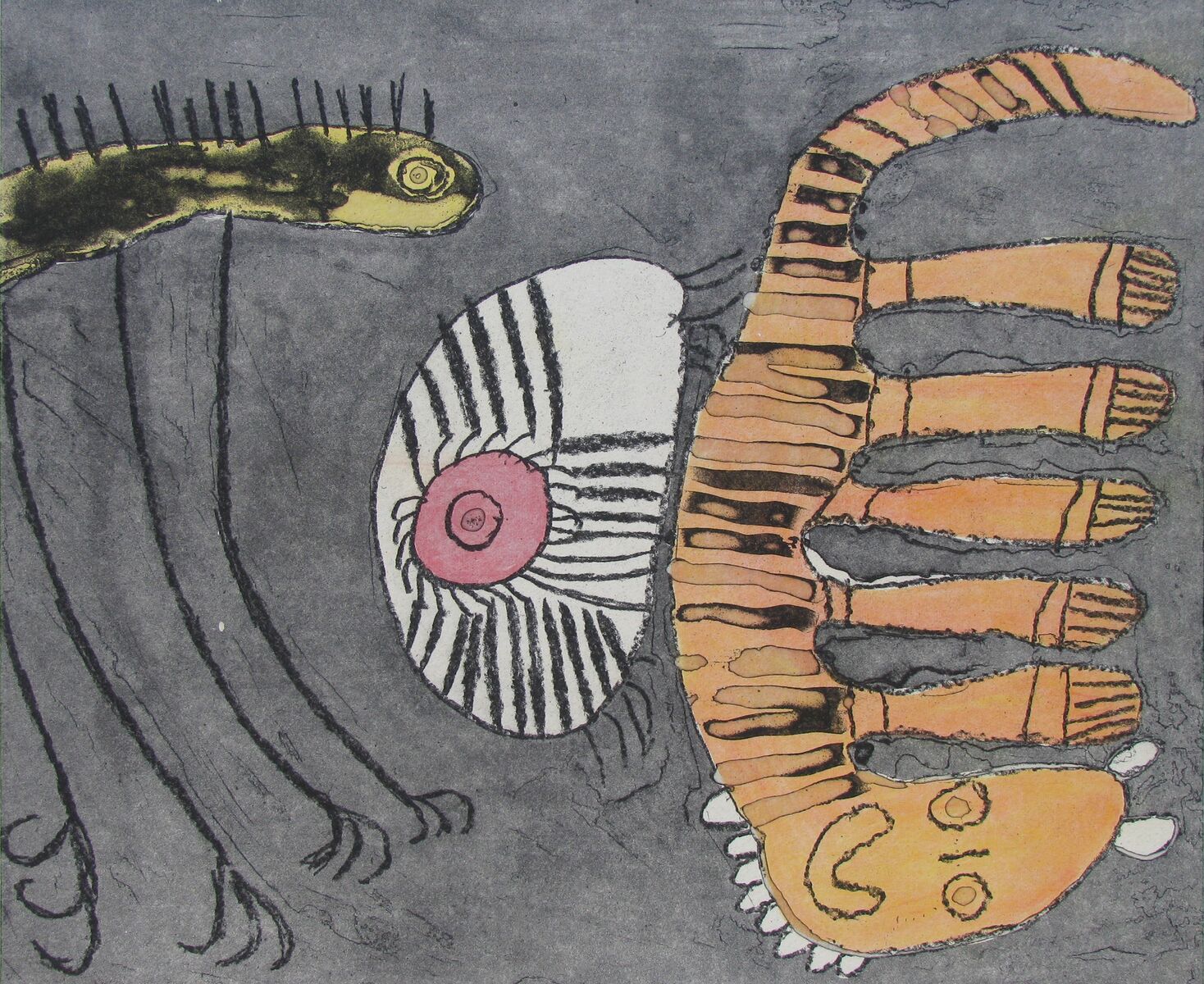 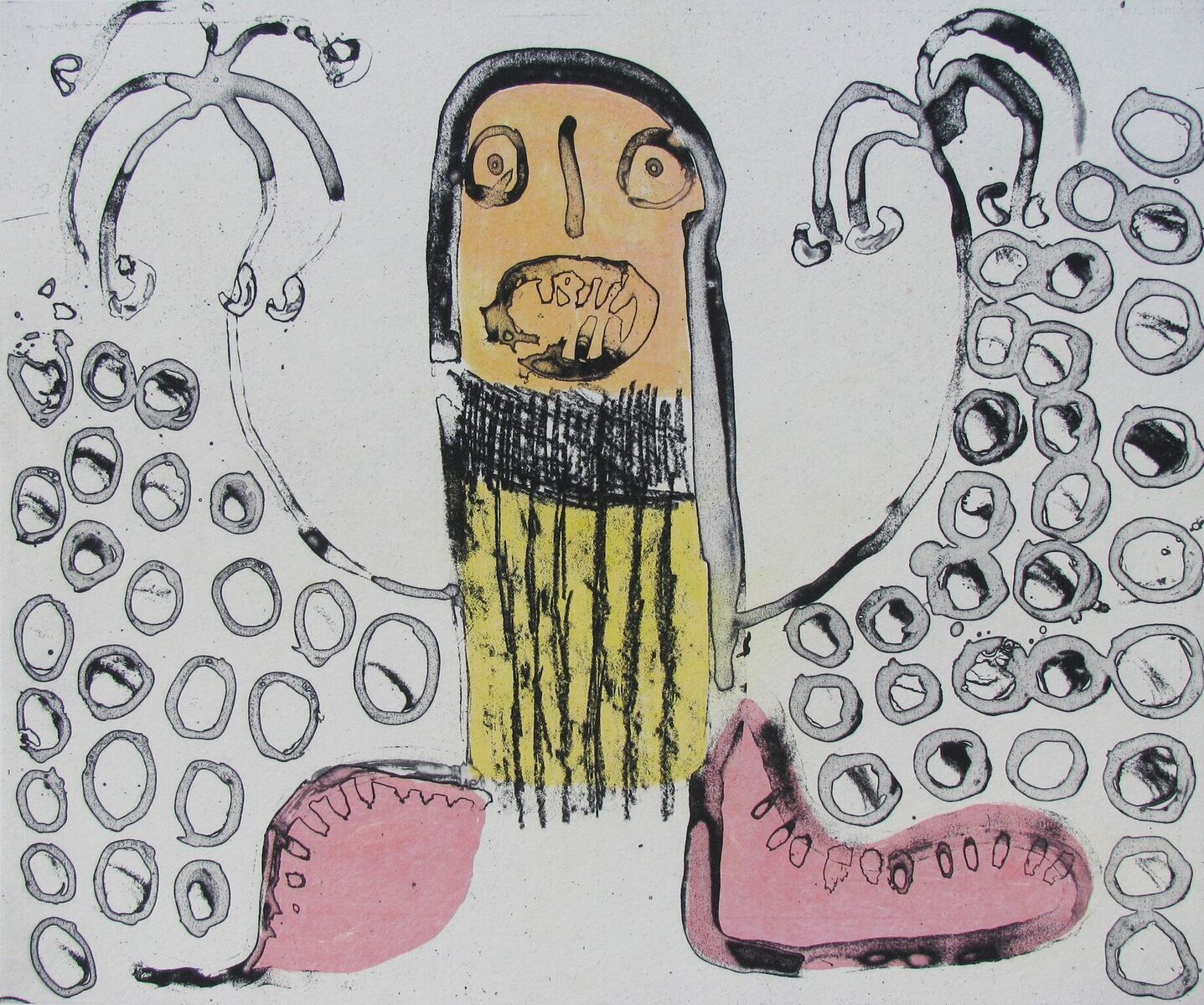 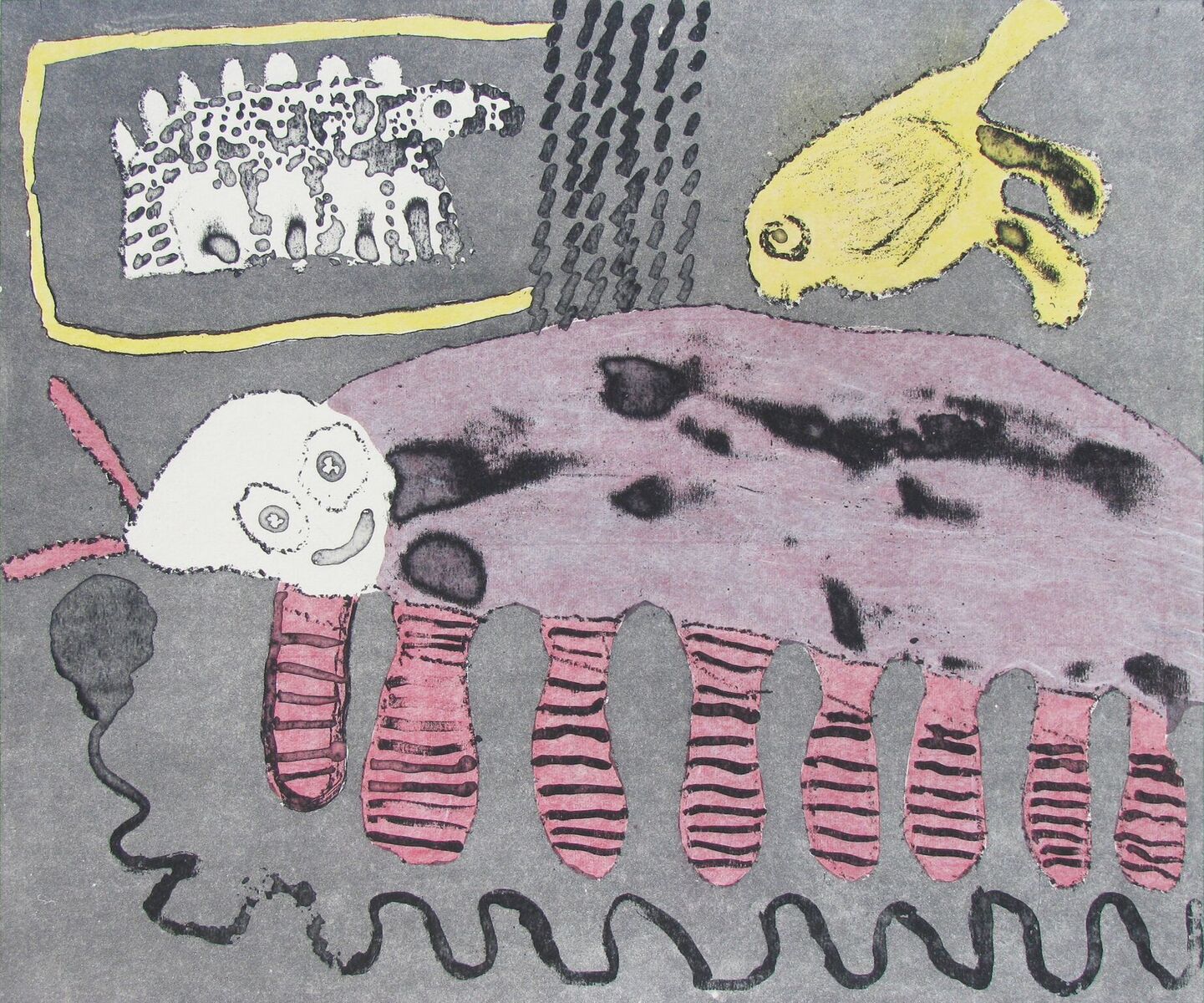 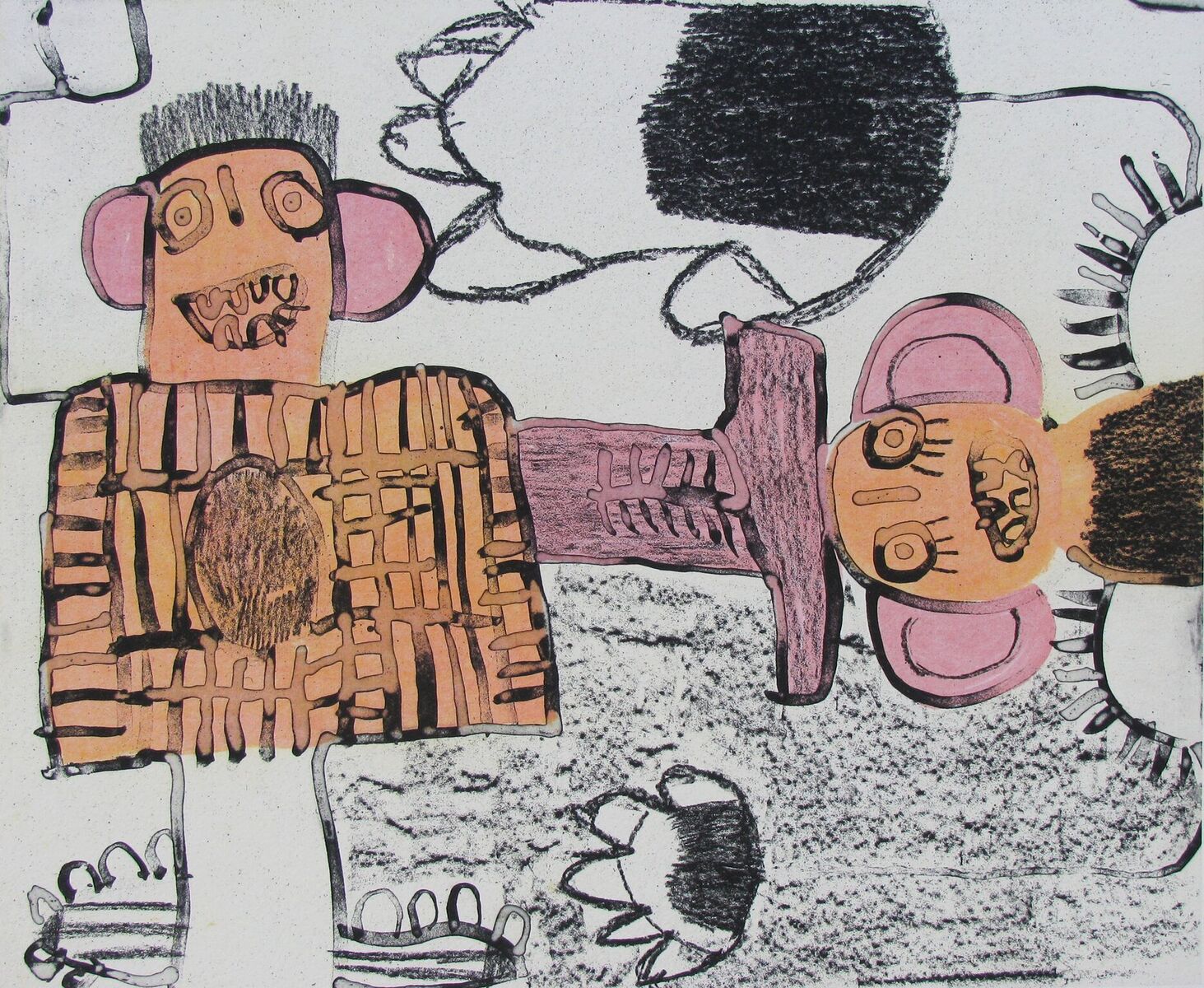 Alcaston Gallery is thrilled to present an exhibition of new paintings by senior Tjala artist Mick Wikilyiri. The striking, contemporary works presented in this exhibition offer a representation of country, spirituality and a rich family history of revealed creative practices.

The story of the Honey Ant is the impetus within Mick Wikilyiri’s painting practice. His landscapes are thoughtfully depicted through striking imagery, stylistic experimentation and intense colour.  As a respected elder in his community, Mick Wikilyiri’s highly contemporary paintings are a celebration of Anangu culture, as well as a means to protect cultural ties for future generations.

Mick Wikilyiri grew up in Amata in the Anangu Pitjantjatjara Yankunyjatjara (APY) Lands of far north South Australia, and worked as a stockman on cattle stations before establishing an artistic career. Wikilyiri was one of the first men to begin painting at Tjala Arts after a men’s painting room was established, and has since become one of Tjala Arts leading artists. In 2016, Mick Wikilyiri featured in the major exhibition Nganampa Kililpil – Our Stars at the Hazelhurst Regional Gallery, New South Wales. Nganampa Kililpil – Our Stars was the first major survey of exhibition of its kind, presenting over 100 artists from across the APY Lands. Alcaston Gallery presented a body of works on paper by Mick Wikilyiri and his wife Paniny Mick in 2017, alongside the first solo exhibition of their daughter Yaritji Young.

Alcaston Gallery proudly presents an exciting body of work by Judy Holding, including new watercolours and sculptures. Judy Holding  is an established multidisciplinary artist with a practice spanning 35 years. Holding’s sweeping painterly documentation and playful sculptural forms present a spirited meditation on plants, animals, indigenous mythology, and the role of man in the vast biosphere. Exuding immense energy, Holding’s personal visual vocabulary of symbolic forms conveys her lifelong connection to the landscape of regional Victoria and far north Australia. Her work is collected by many public and private collections, including the major institutions: the National Gallery of Australia, Canberra; the State Library of Victoria, Melbourne; the Museum and Art Gallery of the Northern Territory, Darwin; the Shepparton Art Museum, Victoria; the Benalla Art Gallery, Victoria; the Mildura Arts Centre, Victoria; and the collections of Deakin, LaTrobe and Victoria University, Victoria.

Alcaston Gallery is delighted to present Irna: Trees a new body of work by The Hermannsburg Potters. This exhibition represents an important development in the practice of the celebrated ceramic artists, introducing new directions in sculptural forms and painterly depictions celebrating the beauty, spirit and life-giving force of trees within the landscape: IRNA: Marna, Itarrkngilanha, Pmara - Tree: Food, Medicine, Home.

Presented alongside new work by leading watercolourist and sculptor Judy Holding, who was artist-in-residence at The Hermannnsburg Potters studio in 2016.

Alcaston Gallery has represented the Hermannsburg Potters spanning 30 years. Their unique, immediately recognisable style has been exhibited widely through Australia and internationally. Their major installation commission for the National Gallery of Victoria Our Land is Alive, NGV Australia 19 December 2015 - 11 April 2016, set new benchmarks for their engaging and lyrical pots.

The Hermannsburg Potters are world-renowned as master ceramicists and their work is held in most major Australian institutions and several major art collections internationally.

Alcaston Gallery has represented the Hermannsburg Potters spanning 30 years. Their unique, immediately recognisable style has been exhibited widely through Australia and internationally. Their major installation commission for the National Gallery of Victoria Our Land is Alive, NGV Australia 19 December 2015 - 11 April 2016, set new benchmarks for their engaging and lyrical pots.

The Hermannsburg Potters are world-renowned as master ceramicists and their work is held in most major Australian institutions and several major art collections internationally.

We are delighted to present Dean Smith's second solo exhibition with Alcaston Gallery - his most adventurous and important exhibition to date. A masterful ceramic artist, Smith has achieved global recognition for his sculptural ceramics and technically complex glazing techniques.

Of his forthcoming exhibition the artist states:

The Pink Terrace was once a large and beautiful silica deposit in New Zealand, created by chance and destroyed by chance, possibly by an eruption of Mount Tarawera.   A place exists and then doesn’t exist.    For this exhibition I have made some slab-built vessels, moving away from the familiarity of the wheel-thrown form as the sole basis for my work. As I build the work my thoughts are around structures, chambers or tombs - permanent structures housing the impermanent/ the permanent structure erased by the forces of nature/beauty and fragility.    - Dean Smith, 2017   Dean Smith was a finalist in the 2016 Biennial North Queensland Ceramic Art Award and is currently a finalist in the 8th Talent Award of the Nassauische Sparkasse at the Keramikmuseum Westerwald, Höhr-Grenzhausen, Germany.   Pink Terraces will be open by Jennifer Kalionis, Director, Castlemaine Art Museum, Saturday 8 April 2 - 4 pm.      Contact us for further information

view exhibition
Favourites
As a member you can save your favourite artworks here for the future.